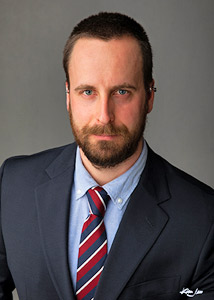 Mr. Hall graduated from the University of New Mexico School of Law in May of 2020. While in law school, Mr. Hall was awarded the Honorable Pete Domenici Award for Environmental Excellence, received the CALI Award for Environmental Law, and served on the Natural Resources Journal as a Submissions and Citations Editor. Mr. Hall was also involved in extracurricular organizations, such as the Environmental Law Society, the Natural Resources and Environmental Law Committee, and the Student Bar Association. Mr. Hall began clerking with Alcaraz Law in October of 2020 and became an associate after passing the bar in November of 2020.

Mr. Hall received a couple humorous and informal awards from his graduating class. Notably, Mr. Hall won the “Power Couple” award with his wife Julia, whom he met, dated, and married while in law school. When not in the office, Mr. Hall is usually running with his wife; playing with his dog, Randolph; or reading a good book.